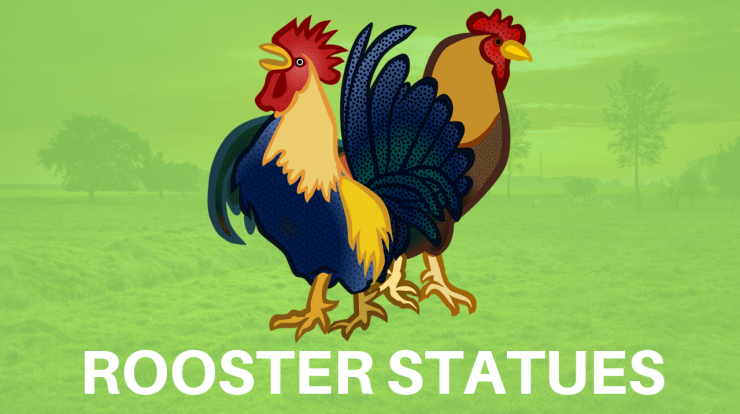 Signifies quite a lot depending on the society it is placed in. there are several religious and spiritual beliefs. Since antiquity, the rooster is one of many sacred animal in some culture not only in Asia, but in Europe, Africa, South America, one could reasonably say all over the whole. A rooster is also known as cockerel or cock. 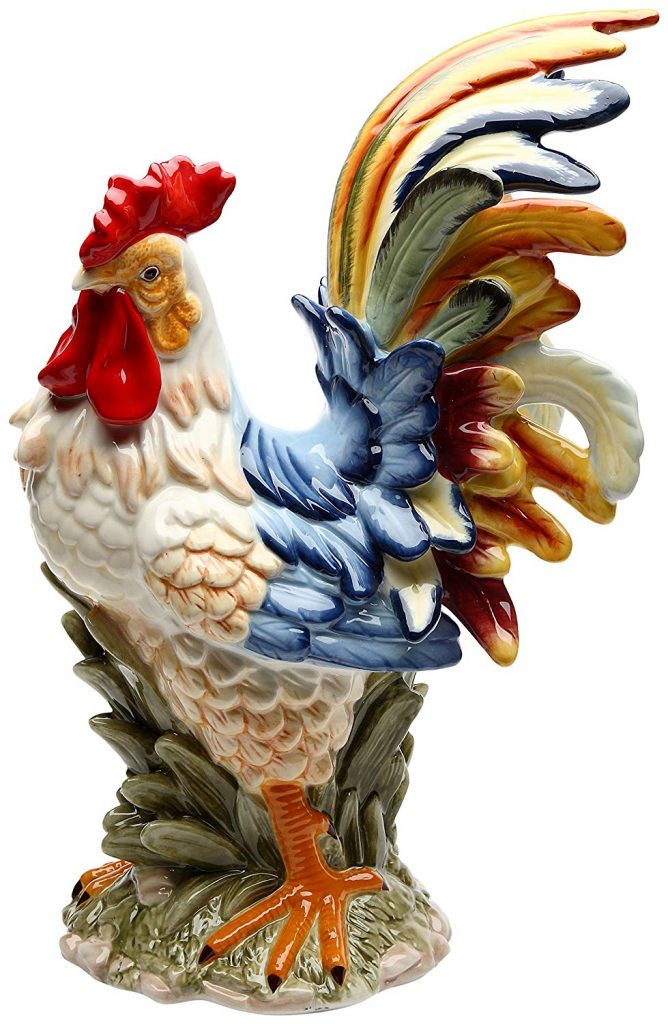 In Chinese tradition, the rooster has a surplus of positive meanings, so also in Feng Shui.

One who understands/speaks Chinese would notice that the pronunciation of the word rooster in Chinese is very synonymous to that of the word “auspicious” and thus a rooster is associated with the bringing of good luck.

Also is their strong, dignified and subduing nature is also considered a very positive representation of Yang energy.

Observing going about it day-to-day activity one would notice five major height desirable traits: nobility, militancy, courage, dependability and altruism.  Its nobility can be observed as it moves with its handsome crest and tail feathers.

Militancy traits, from its mighty aggressive spurs on its feet. Courage in defending itself from danger, willingness to face an enemy, irrespective of the opponent’s size, it would willingly put up for a fight.

His reliability is observed by his daily sunrise call and his altruism stems from his willingness to share his food with other rooster.

According to the Norse tradition, the rooster is a symbol of soldierly vigilance, posted on the topmost branches of the ash Yggdeasil to warn gods when the giants their foes, were preparing to attack them.

Also Christian (not all but majorly the Catholic) see the rooster as an emblem of Christ, like an eagle or lamb, a symbol of light and resurrection. It assumes the position of protector and guardian of life.

In the Book of Job, the rooster is seen as the symbol of God’s-given intelligence while the ibis is the symbol of wisdom.  In Islam, he Prophet himself asserts that the white rooster is his friend because it announces the presence of the Angel, also did the Prophet prohibit cursing of rooster, which calls to prayer (prayer at dawn).

Roosters statues for garden and outdoor

The rooster statue being an antique is used as a piece of sculpture art in beautifying an environment. On most occasions, the beautification of an environment with statues generally has a story to tell.

The rooster statues can be seen in place like France, London(north), Russia, and in areas/building that were built/governed by the catholic as history would tell.

Rooster (Gallic) is an emblem of France, Wallonia and the Turkish city of Denzil.

So also does the Famous football clubs, Tottenham Hotspur Football Club in London having a rooster on a ball as their symbol, Turkish sports club Denizilspor, Clube Atletico Minero, from Brazil.

The Coat of arms of Kenya features a rooster holding an axe. The emblem of Chianti Classico is a black rooster.

Popular places with the rooster statue can be found at the war memorial in La Rochelle, World War 1 memorial at Liomer Somme.

Having a rooster statue in your kitchen is considered to bring luck. Luck being the most predominant of all the symbols a rooster represents to different cultures.

As said earlier, in a Christian home, a rooster statue is a signifier of the Passion of Christ, while in a non-Christian home, it is used as a good omen.

It is of an old superstition that says, if a rooster comes into your kitchen it is a sign of good fortune, wealth and prosperity entering the household. I doubt if people today would think of letting a rooster into their compound not to talk of kitchen. 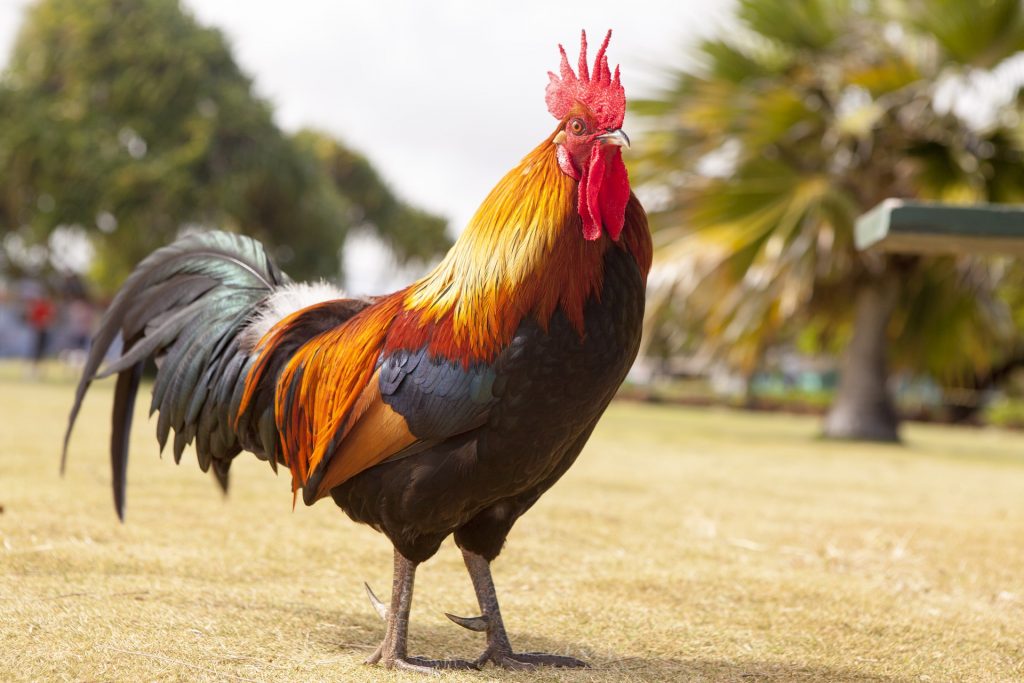 Never he less, the belief is still very much alive till this very moment, with all sorts of stuff for the kitchen having an illustration or picture having a rooster on them.

Rooster should be placed directly facing or diagonally across from the main entrance, so to protect from affairs and adultery for your entire household. It can also be given as a gift to your spouse, to keep a watchful eye and prevent illicit happenings or external interference in your relationship bond.

I once saw a rooster statue in a kitchen beside a basket filled with eggs but didn’t understand the story at that time, just took it for fun and laughed.

Whether it be a rooster clock, cookie jar, wall paper, dish towels, trivet, or just a ceramic roosters sitting on the back of the stove watching over the kitchen.

Most people who have an illustration or picture or a statue of a rooster say that seeing a kitchen rooster not only makes them feel at home, it makes the entire kitchen warm, comfortable and inviting. It gives them a nostalgic feeling.

Different color of a rooster statue

A real roster itself, has at least a two color combination. Though most often, the rooster statues are found in the kitchen, the most sought after color is the white depending of the color setting of the kitchen/ home.

The color of the rooster statue depends on the taste of the believer. There are various colors which can be used depending on one’s choice but traditionally the colors available are the golden statue, the brass, bronze, metal, wood, ceramic white or a silver statue.

Are usually engraved with stones, it’s a traditional architecture and often used in decorations.

The available materials to build/sculpt an rooster statue are marble, bronze, sandstone, granite, silver, gray stone, and most often in India a gold plated statues (usually a small mini, not that big).

This website uses cookies to improve your experience while you navigate through the website. Out of these, the cookies that are categorized as necessary are stored on your browser as they are essential for the working of basic functionalities of the website. We also use third-party cookies that help us analyze and understand how you use this website. These cookies will be stored in your browser only with your consent. You also have the option to opt-out of these cookies. But opting out of some of these cookies may affect your browsing experience.
Necessary Always Enabled

Any cookies that may not be particularly necessary for the website to function and is used specifically to collect user personal data via analytics, ads, other embedded contents are termed as non-necessary cookies. It is mandatory to procure user consent prior to running these cookies on your website.